When we last checked on The Volvo Ocean Race, the sailors had ridden the Caribbean current and safely crossed the Bermuda Triangle, reaching Miami in 17 days.

In fluky, dying-wind conditions just off shore of glittering South Beach, Ian Walker and the crafty vets aboard Abu Dhabi once again showed their mastery of short-handed, close-track, in-port sailing by battling Groupama neck-and-neck the entire in-port race. PUMA stole third from Camper in a photo finish.
The Telefónica crew managed to shoot themselves in the foot yet again. After grabbing the lead at the first windward mark, getting rolled after sailing offshore and pounded by the current, the Spanish boat hit the next-to-last mark after desperately trying to squeeze in a floundering leeward tack, forcing a penalty turn that doomed them to last place. In consequence, rivals closed the score gap.

Across the Atlantic
Abu Dhabi continued its mastery of Miami by leading the pack on its 3,590-mile leg to Lisbon against a stiff north wind and the three-knot Gulf Stream.
Normally, the quickest route to Europe is not the most direct. Previous Volvo winners have sailed up the coast of North America as far as the top of Maine, where an iceberg exclusion zone marks the northern limit of the course, and then shot east to Europe.
That strategy went out the window when Tropical Storm Alberto rolled in off the coast of Georgia, offering a narrow window of opportunity for any boat that could catch a ride on its powerful winds all the way to the Azores.
That was a nice plan, but when TS Alberto unexpectedly turned, the smooth downwind sailing at the storm’s edge turned into the worst nightmare of every boat but Groupama. The French boat gibed before trouble hit, and this time the move handed the mariners a 70-mile lead on PUMA.
Abu Dhabi Ocean Racing skipper Ian Walker described the frustrating struggle with the big storm.
“We were trying to ride the wind shift and extra wind just to the south of it, but a violent wind shift headed us straight into the eye of the storm. We came off some terrible waves. The lightning was crashing all around right down to the water and it didn’t seem possible our carbon mast could avoid a direct strike.”
Alberto finally drifted north and the fleet headed east, enjoying some fast downwind sailing. At this point, the fleet had separated by about 40 miles, with Telefónica farthest to the north and Camper to the south. Groupama and PUMA took the middle lane.

Reading the North Atlantic
The North Atlantic is always unpredictable. Racing models showed several options — and challenges — ahead.
Will Oxley, the frazzled old navigator on Camper agonized. “There is a big high about to roll down over the top of us. The routing is showing two quite dramatically different solutions. If you are slow you need to bug out now and go well north to get above the high pressure that’s coming in from Canada. If you are fast enough you can slip through to the Azores.”
The next guest to the party was a big high-pressure system of light winds dropping down from Newfoundland. Camper was the first to tack north toward the icebergs, followed by PUMA and Sanya. The lead boats, Telefónica and Groupama, along with Abu Dhabi, continued east, sailing around the bottom of the new game changer.
The Newfoundland High soon convinced the southern boats to tack north to escape the system’s windless grip.
“For a few days we have clung to the hope that we could ride the southwesterly wind east and connect with the westerly flow round the Azores High that would deliver us to Lisbon,” said Abu Dhabi skipper Walker. “It was a dream scenario.”
The nightmare began as the fleet slogged its way ever north, searching for breeze along the meandering edges of the Gulf Stream in the frigid North Atlantic. The race tracker GPS showed six boats heading east, then north, then east, then north, climbing steadily into the land of the ice and snow. No one slept. There was barely time to eat. The wind constantly shifted — sometimes as much as 60 degrees — forcing all hands, wearing full foul-weather gear, to change the sails in a chaotic scramble.
Amory Ross aboard PUMA said, “Everyone’s crisscrossing around out here and the first boat free will likely have a large advantage as forecasts are calling for fast downwind conditions. But the weather isn’t going according to schedule and we’re still searching for a sign of the system’s northern boundary.” 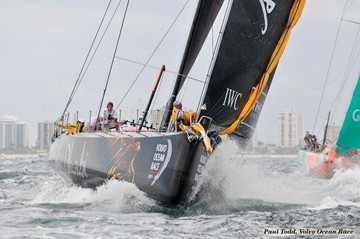 Abu Dhabi was the first boat to find the strong westerlies and rocket toward Lisbon, followed by PUMA and Camper. Now it was straight-line, fast downwind sailing with one final roadblock of light wind remaining about 200 miles from the finish line.

Upset at the Finish
One of Volvo’s closest finishes followed 12 days of intense racing as Abu Dhabi squeaked out a six-minute victory over Groupama, followed by PUMA. That turn of fate pushed Groupama into the overall lead and dropped Telefónica to second.
Check out the exciting finish of Leg 7 at www.bystevecarr.blogspot.com. 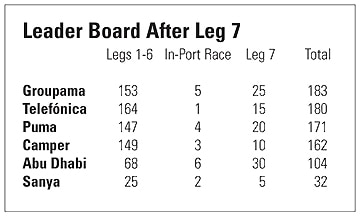 Next Stop: Lorient, France. Between Carr’s reports, follow the race at www.volvooceanrace.com/en/home.html.

In This Week’s Issue
Classified Ads
Marketplace (2)
Marine Marketplace (1)
Services (1)
Home Improvement (1)
Can't Get Out? Get It Here!