Depending on how you interpret those words, it rings true, especially for the semi-poetic naturalist.

As we approach Valentine’s Day, courtship displays are taking place for humans and animals alike. While we exuberant humans are making dinner reservations and planning weekend getaways (or at the very least purchasing vast amounts of Sweethearts candy) romance is already underway in the natural world.

Our midwinter holiday celebrating all things love happens to coincide with the breeding season for many species in the Chesapeake region. Only a few weeks ago white-tailed deer does released pheromones in the air letting bucks know they were in estrous.

The signs are everywhere; you just need to know what to look (or listen, or sniff) for.

Do you hear what I hear?

The red fox has perhaps the most frightening breeding season behavior: a vocalization that sounds like a blood-curdling scream under the dark of night. Those who hear this banshee-like screech often think a crime is being committed or imagine they’re being haunted. In reality, it is most likely a female fox, a vixen, communicating to males that she is looking for a mate (males may also make this shrilling call, though most likely it is territorial). Foxes are much more vocal during the breeding season, especially at night, and these calls travel long distances.  Once a pair is formed, the male and female will travel together for a few weeks and eventually form a den. Gestation for the red fox is short, roughly 51-53 days. If you’re very lucky you may even catch a glimpse of our other wild canids the gray fox and coyote, also in the midst of the breeding season and on the move.

The winter months are also a great time to look for great horned owls. These apex predators are one of our region’s earliest courting birds, and pairs begin hooting to each other during autumn and early winter. They utilize nests abandoned by hawks, squirrels and even eagles (some owl pairs have even taken over the nests of active bald eagles). While the bulk of their courtship is now over, nesting is underway and an excellent time to try to find them. Due to their nocturnal nature, they are not as likely to be seen during the warmer months. Take advantage of the bare trees and look up for those nests.

Do you see what I see?

Perhaps the most charismatic of our early breeders are bald eagles. These majestic birds of prey form monogamous pairs, mating for life until death separates them. In the Chesapeake region nest-building occurs between December and January while egg-laying and incubation can occur January through April. Eagle pairs often sit perched together before incubation, a sign of courtship. Courting pairs will also preen each other and touch bills. If you are fortunate you may even observe courting eagles soaring with locked talons and spiraling downward together, 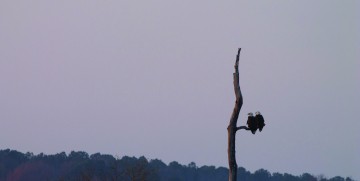 unlocking as they near the ground.

Finding an eagle’s nest is a good inclination that there will be a pair nearby. A nest is large, usually 4-5 feet in diameter and around 4 feet deep. Look high into the forest canopy near a body of water for large forked branches supporting a nest. As big as these nests are, they will soon become crowded with eaglets in the spring.

Midwinter is a great time to get outside and look for courting wildlife. At the very least, this information may serve as a conversation starter to use with that special someone.

Even better, take your date on a nature stroll and look for evidence of these courting species. Just remember to keep a safe distance when observing wildlife to keep from disturbing the animals.

After all, you would appreciate some privacy on your date, too.