If there’s any day to bridge the gaping American divide, it’s Thanksgiving. On that great American feast, consensus rules. Eighty-eight percent of us report that turkey will be our Thanksgiving dish of choice, according to the National Turkey Federation. Certainly for me, one of the great pleasures of the day is the near unanimity of sharing in one great meal, all across the nation.

Following in the train of that bird — so delicious if cooked gently — comes a procession of dishes required by tradition, locality or season. Root vegetables — white and sweet potatoes, carrots, parsnips perhaps beets — and vine vegetables — pumpkins and squash — meet all three criteria and appear on many tables.

Cool-loving greens vary with your culture. If you’re southern or African American, kale, collards or mustard may well be your greens of choice. Middle Europeans might prefer chard, while German-rooted families may feast on cabbage or creamed spinach. Of course we’ll have cranberries, which make us think we’re all Pilgrims.

There must be dressing — if you serve it on the side — or stuffing — if you prefer to put it inside the bird. How that dressing is prepared depends on family, culture and taste. My Midwestern roots want a bread base. Pennsylvanians might prefer potatoes. My Maryland colonization recommends I add oysters.

“The Maryland state seal features a farmer and watermen, and there is no better way to honor that tradition than to include local meats, seafood and produce in your holiday meals,” says Agriculture Secretary Joe Bartenfelder. I heartily agree, though I prefer to serve oysters, those precious delicacies, as an appetizer. This year, I’ll be serving National Cook-Off prize-winner Marty Hyson’s Smoked Chardonnay Oysters.

This year, we offer you culture-combining Thanksgiving recipes conceived by culinary pros — cookbook author Lucie Snodgrass — and prize-winners at the National Oyster Cook-Off. To promote diversity within unity, work these recipes in with your own favorites.

They’ll all taste better — and honor Thanksgiving’s roots as a harvest festival — if they come from Maryland farms. As Bartenfelder says, “Buying local for the holidays is a great way to thank our farmers, producers and watermen for the hard work they do year-round.”

I usually bake my stuffing separately, so that vegetarians can eat it, but you can certainly divide the stuffing, putting some in the turkey and baking some separately, if you prefer. If you choose to stuff the turkey, you will need to increase the roasting time.

–Lucie Snodgrass, Dishing Up Maryland
1 (16- to 18-pound) Narragansett or other heritage-breed turkey, cavities cleaned, rinsed and patted dry
1 small onion, peeled
6 garlic cloves, peeled
1 tablespoon Dijon mustard
3 tablespoons olive oil
1 teaspoon sea salt
½ teaspoon freshly ground black pepper
1 teaspoon dried sage
1 teaspoon dried thyme
½ teaspoon dried rosemary
½ teaspoon dried savory
Preheat oven to 325 degrees. Place the turkey breast side up on a rack in a shallow roasting pan. Make six small incisions in the turkey’s skin using a sharp knife. Insert the garlic under the turkey’s skin.
Spread the mustard over the turkey’s skin with a knife, and then drizzle the olive oil over. Sprinkle the salt and pepper on the turkey’s skin and in the cavities, and place the onion in the neck cavity. Sprinkle the sage, thyme, rosemary, and savory over the turkey, and insert a meat thermometer into one of the thigh areas near the breast.
Loosely cover the bird with aluminum foil, making a tent over the turkey and lightly tucking the foil around the edges of the pan. Roast for about 4 hours, or 15 minutes per pound. About 30 minutes before the turkey is done, remove aluminum foil and allow the skin to brown. Continue roasting until the meat thermometer reaches 180°F and the turkey’s juices run clear.
Remove the turkey from the oven and let it stand, covered, for 20 minutes.
12 servings
Black Friar Farms Oyster Dressing

I grew up on a farm my grandparents owned. Thanksgiving was a much celebrated holiday. My grandfather would go down to the barn and pick out a turkey and bring it to my grandmother. I would stand next to her at the kitchen sink and watch her pluck the feathers. Our turkeys were huge and served unstuffed, with dressing baked separately.

I was lucky in my life as I had two wonderful cooking mentors. My mother was a wonderful home cook, and I learned much of what I know from her. But when I met my husband in the late 1970s, I was introduced to his grandmother, Mom-mom Bessie. She was amazing. She made the best Pennsylvania Dutch comfort food I ever had, and she was gracious enough to teach me some of her recipes. I would spend Saturdays with her in her kitchen. She taught me how she made her apple dumplings, fasnachts and her old fashioned potato filling. Her filling was like eating a potato soufflé, a result I have yet to achieve. But my recipe is a close second. 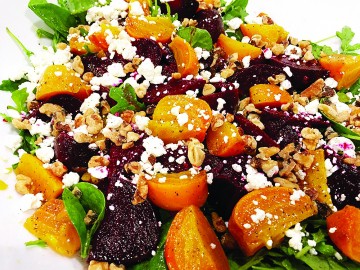 I created this recipe about 15 years ago so we would have something different for our Thanksgiving meal. I always loved the combination of sweet/sour, sweet dried cranberries, toasted nuts and Gorgonzola. I added the roasted beets for color. The result is now a family favorite and a Thanksgiving tradition.

In This Week’s Issue
Classified Ads
Homes/Rooms for Rent (1)
Services (1)
Home Improvement (1)
Can't Get Out? Get It Here!